On October 22, 2022, at approximately 6:26 p.m., a 2013 Honda Civic was traveling southbound in the left lane of Bay Road (Route 1), just south of Tub Mill Pond Road. The Honda was traveling behind another vehicle that was not involved. At the time, a bicyclist entered the left, southbound lane of Route 1 attempting to cross from east to west. The bicyclist entered the path of the uninvolved vehicle causing it to stop suddenly. This action caused the Honda to change lanes into the right travel lane. The bicyclist was crossing the right travel lane and in the path of the Honda. The front of the Honda struck the right side of the bicycle and ejected the bicyclist.

The 36-year-old male bicyclist of Milford, DE was flown to Christiana Hospital in critical condition. On October 23, 2022, the victim was pronounced deceased. Identification of the victim is pending notification to the next of kin.

The 19-year-old operator of the Honda was not injured.

Route southbound 1 was closed for approximately 2 1/2 hours while the collision was investigated, and the roadway cleared.

This crash remains an active and ongoing investigation. Anyone with information regarding the crash should contact Master Corporal Booth of the Delaware State Police Troop 3 Collision Reconstruction Unit by calling 302-698-8451. Information may also be provided by messaging the Delaware State Police on Facebook messenger or calling Delaware crime stoppers at 1-800-TIP-3333 or via the internet at http://delaware.crimestoppers.com. 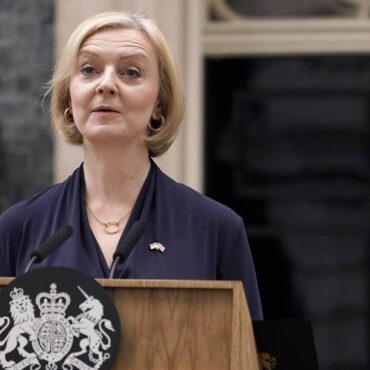 LONDON (AP) — British Prime Minister Liz Truss has resigned. She has bowed to the inevitable after a tumultuous term in which her policies triggered turmoil in financial markets and a rebellion in her party obliterated her authority. Just a day earlier Truss had vowed to stay in power, saying she was "a fighter and not a quitter." But Truss left Thursday after she was forced to abandon many of […]