Harrington – The Delaware State Police Homicide Unit have arrested a Harrington man after he killed his wife Sunday morning.

The incident occurred around 11:51 a.m. Sunday November 21, 2021, when Richard W. Nelson, 69, called the Kent County Emergency Operations Center (9-1-1) to report that he had killed his wife and dog. A Harrington Police Officer was first to arrive at the 100 block of E Lucky Estates Drive address and entered the residence through a partially open garage door. Upon entering, the officer observed the victim deceased on the floor in a pool of blood. The officer backed out of the residence to wait for responding troopers before further entering the residence. While waiting, Richard Nelson exited the garage and was taken into custody without incident.

When troopers and detectives re-entered the house, it was confirmed the victim, who has been identified as Sandra M. Nelson, 74 of Harrington, had been stabbed numerous times in the garage and pronounced dead by Kent County Paramedics. She was transported to the Delaware Division of Forensic Science where an autopsy will be performed to determine the exact cause and manner of death. A family dog was also located deceased in a bedroom of the house and appeared to have been stabbed to death as well.

Richard Nelson (no photo available at this time) was transported to Troop 3 in Camden where he was charged with Murder 1st, Possession of a Deadly Weapon During the Commission of a Felony, and Cruelly or Unnecessarily Kills or Injures Any Animal. He was arraigned at JP7 and committed to Sussex Correctional Institution on $522,000.00 cash bond.

This case remains an active and ongoing investigation being conducted by the Delaware State Police Homicide Unit. Anyone with information regarding the incident is asked to contact Detective D. Grassi by calling 302-365-8441. Information may also be provided by calling Delaware Crime Stoppers at 1-800-TIP-3333 or via the internet at http://www.delaware.crimestoppersweb.com.

If you or someone you know is a victim or witness of a crime or have lost a loved one to a sudden death and are in need of assistance, the Delaware State Police Victim Services Unit/Delaware Victim Center is available to offer you support and resources 24 hours a day through a toll-free hotline 1800 VICTIM-1. (1-800-842-8461). You may also email the Victim Services Unit at DSP_VictimServicesMail@delaware.gov. 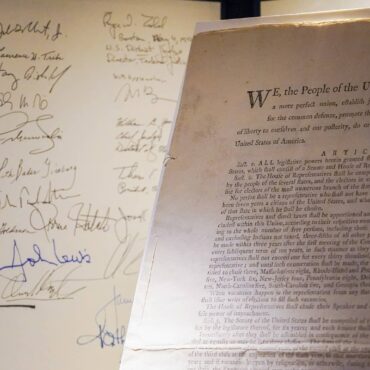 Rare first printing of US Constitution sells for record $43M

NEW YORK (AP) — A rare first printing of the U.S. Constitution has sold at Sotheby's in New York for $43.2 million, a record price for a document or book sold at auction. The anonymous winning bidder at Thursday night's sale outbid a group of 17,000 cryptocurrency enthusiasts from around the world who crowdfunded to buy it over the last week. The document offered for sale was one of 13 […]