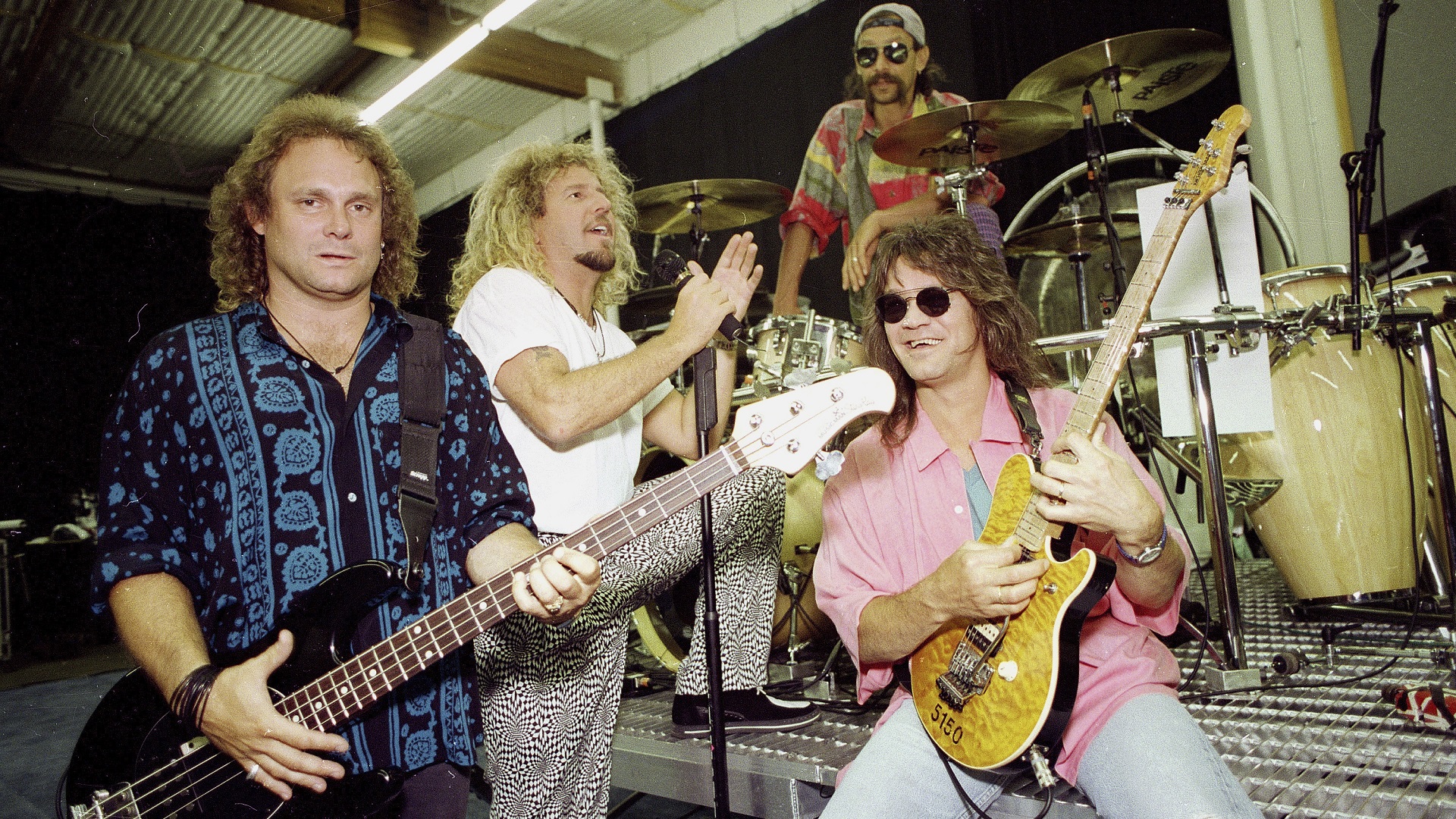 Van Halen (/væn ˈheɪlɛn/ van HAY-len) was an American rock band formed in Pasadena, California in 1974. Credited with “restoring hard rock to the forefront of the music scene”, Van Halen was known for its energetic live shows and for the virtuosic talent of its prodigy lead-guitarist, Eddie Van Halen. The band was inducted into the Rock and Roll Hall of Fame in 2007.
From 1974 until 1985, Van Halen consisted of Eddie Van Halen; Eddie’s brother, drummer Alex Van Halen; energetic vocalist David Lee Roth; and bassist/vocalist Michael Anthony. Upon its release in 1978, the band’s self-titled debut album reached No. 19 on the Billboard pop music charts and would sell over 10 million copies in the U.S. by 1982, the band released four more albums (Van Halen II, Women and Children First, Fair Warning, and Diver Down), all of which have since been certified multi-platinum. By the early 1980s, Van Halen was one of the most successful rock acts of the day. The album 1984 was a commercial success with U.S. sales of 10 million copies and four hit singles; its lead single, “Jump”, is the band’s only U.S. number one single to date.
In 1985, Roth left the band to embark on a solo career and was replaced by former Montrose lead vocalist Sammy Hagar. With Hagar, the group released four U.S. number-one, multi-platinum albums over the course of 11 years (5150 in 1986, OU812 in 1988, For Unlawful Carnal Knowledge in 1991, and Balance in 1995). Hagar left the band in 1996 shortly before the release of the band’s first greatest hits collection, Best Of – Volume I. Former Extreme frontman Gary Cherone replaced Hagar and recorded the commercially unsuccessful album Van Halen III with the band in 1998, before parting ways in 1999. Van Halen then went on hiatus until reuniting with Hagar in 2003 for a worldwide tour in 2004 and the double-disc greatest hits collection The Best of Both Worlds. Hagar again left Van Halen in 2005. In 2006 Roth returned, but Anthony was replaced on bass guitar by Wolfgang Van Halen, Eddie’s eldest son. In 2012, the band released their final studio album A Different Kind of Truth, which was commercially and critically successful; it was also Van Halen’s only album with Roth in 28 years and the only one to feature Wolfgang.
As of March 2019, Van Halen is 20th on the RIAA list of best-selling artists in the United States; the band has sold 56 million albums in the States and more than 80 million worldwide, making them one of the best-selling groups of all time. As of 2007, Van Halen is one of only five rock bands with two studio albums to sell more than 10 million copies in the United States and is tied for the most multi-platinum albums by an American band. Additionally, Van Halen has charted 13 number-one hits on Billboard’s Mainstream Rock chart. VH1 ranked the band seventh on a list of the top 100 Hard Rock artists of all time.
On October 6, 2020, Eddie died from cancer, which he was initially diagnosed with in 2001. Wolfgang subsequently confirmed a month after his father’s death that Van Halen had disbanded.